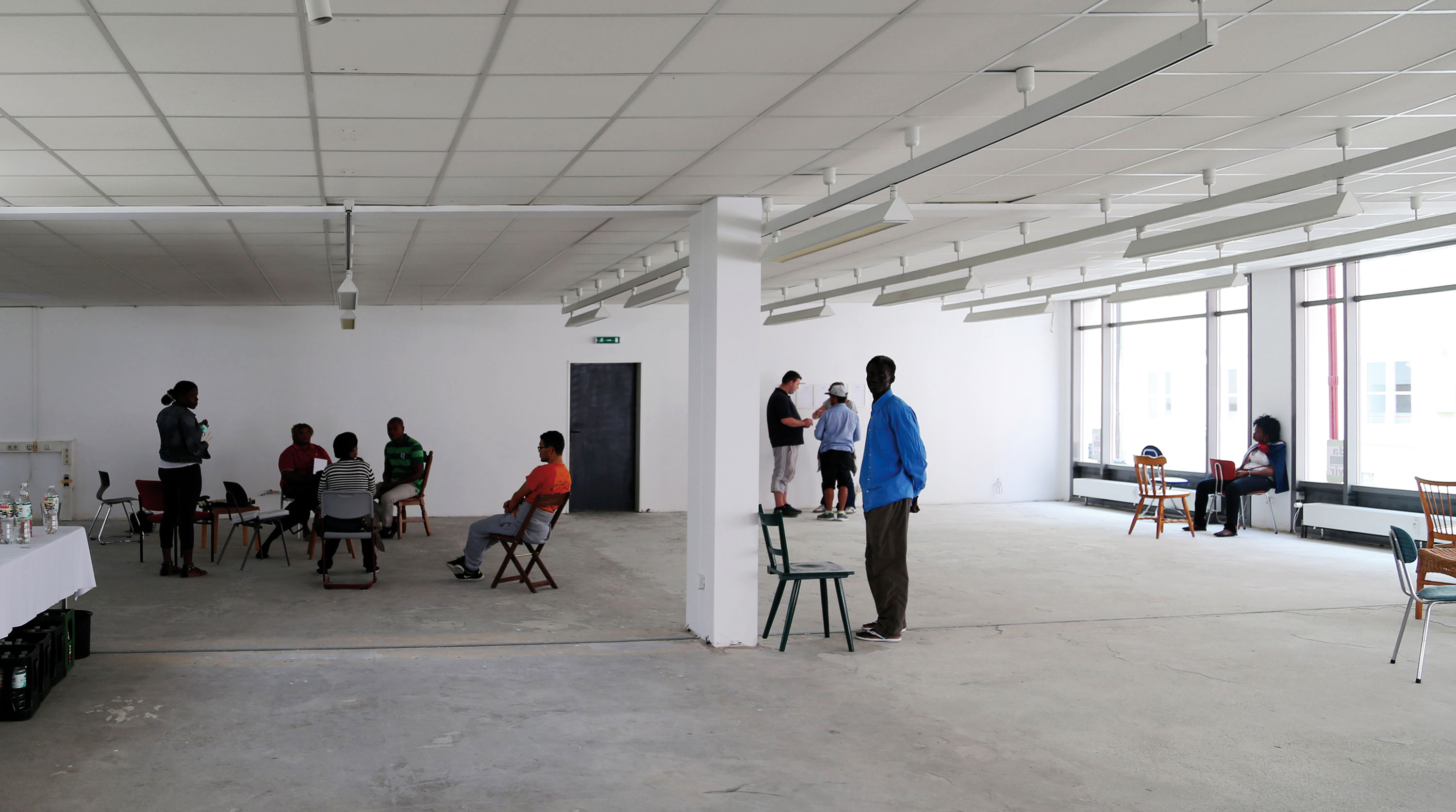 “In addition, as far as possible, work opportunities should be offered at governmental, at municipal and at non-profit organizations, given that the work would otherwise not be carried out to this extent or at this time.” (German Social Welfare Law for Asylum Seekers, § 5 Work Opportunities).

The offer to work with me at the long-term Performance ‘Waiting’ is the attempt to comply with the request cited, in the Asylum Seekers Benefits Act. The implementation of the project generates a series of works. 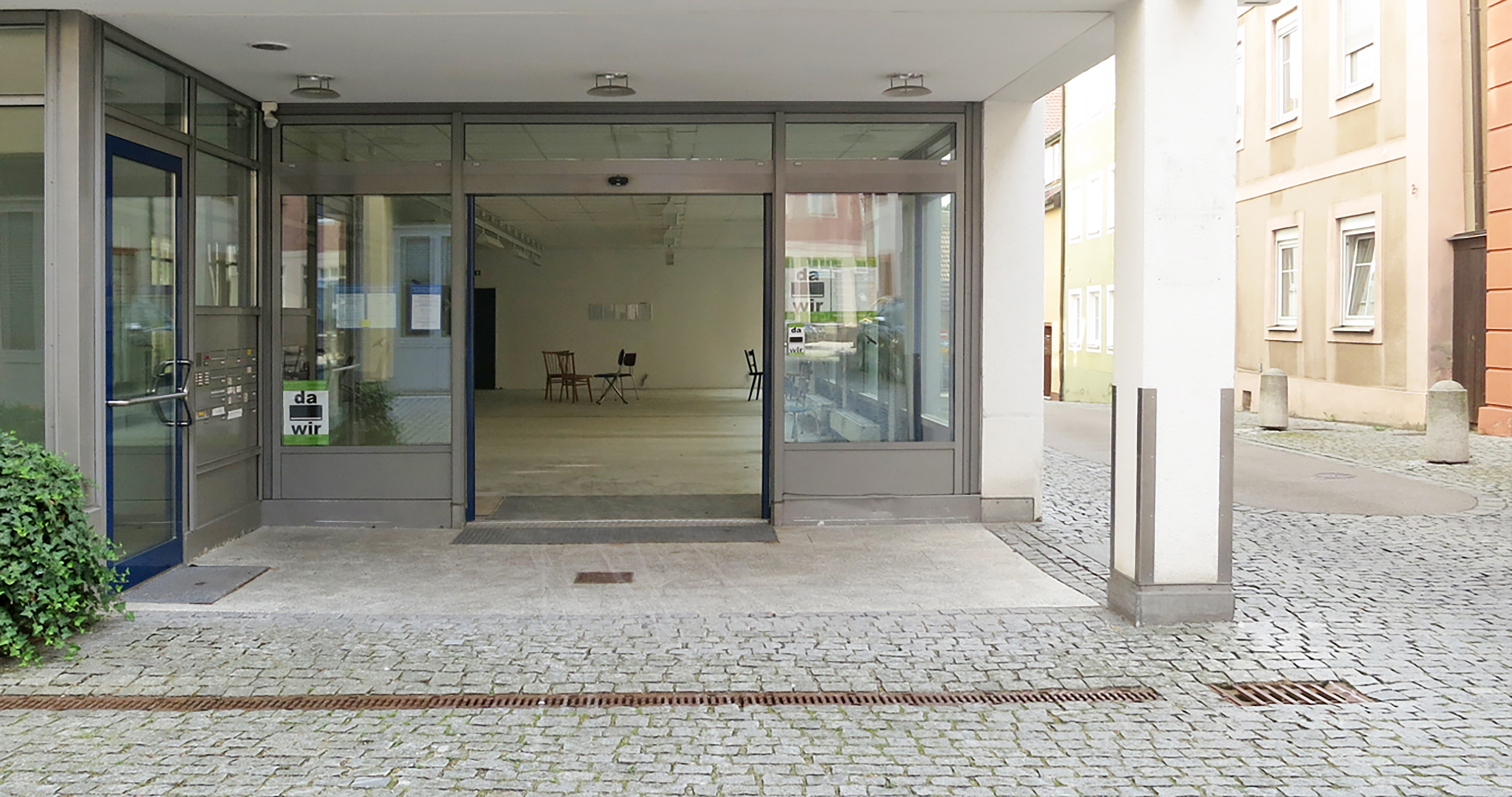 I sit and wait in the approx. 250 m2 large, empty, white painted former 'Weltbild' shop. There are 20 different chairs available for potential employees. Shortly after 10 o'clock, the first interested parties arrive. Once again I explain the activity: an open stage on which everyone can work as required and develop their self-defined role. The setting can also be changed or designed at any time. My role is to be passive, to give no instructions only to accompany.

We start with work, taking a seat, standing or walking back and forth. Where to go with your body? Along the shop window leads a narrow one-way street, passing pedestrians and slow moving cars. The passers-by have a shop window image of superimposed reflections of the interior and exterior space, the interior lighting remains switched off, so that a reflective „protective layer“ is retained. Passers-by can only see the waiting people inside when approaching the disc, the people waiting inside can also see the people outside when they look inside.

My, ever the same, work clothes are a T-shirt with a peace sign. The mobile phone on the tripod casually films half of the room. Those who do not want to be filmed, go in the other part of the room, or change the view of the video recording. When visitors enter the open stage, they become guest performers, seeking a suitable position. They are enthusiastically welcomed, looked at or ignored and are in any case required to behave.

Are all present people performers? Or exhibition visitors? The freelancers wear changing work clothes. One visitor comes with two guitars and an amplifier, sits down to a group of waiting people, strumming, they show polite interest. Then everyone continues waiting by themselves.

After many hours spent together we hardly know anything about each other, our lack of language skills makes storytelling impossible, but the time spent together creates a different kind of closeness, as does the unusual situation. No recognizable new roles, interventions or strategies are being developed. The working time is always extended, one day we wait eight hours. I am often asked to continue offering this job opportunity. Because of the money but mainly because of the large lounge space.

The payment of the workers (1.05 € an hour) is the most dreaded moment of my day. I have become an employer with shameful conditions, performing daily one act of the Asylum Seekers Benefits Act. A nervous group is standing around me. Everyone has to write their daily earnings in my list, I pay the children too, a helpless gesture. And what to do with false entries? I count as I put the coins, one by one, in the recipient's hand – they are counting along too. Because I'm so nervous, often some coins fall down. Many stoop to pick them up. The job is done. Everyone goes home.